Only by living absurdly is it possible to break out of this infinite absurdity.
—Julio Cortazar

Life and death have been lacking in my life.
—Jorge Luis Borges

Salamatina Gallery is pleased to present its first solo exhibition with Veronica Villegas, a painter who lives and works in Mexico City. For this exhibition, Villegas presents a new body of work, Almanaque de Arena, which explores relationships between religious icons and the social and historical background of Latin America.

Many Latin Americans entrusts their wellbeing to religious images, which provide impetus for spiritual journeys made in search of better lives. In works like Mistagogos Our Lady of El Cobre (2016), Cuba's main religious icon–which is synonymous with the country's nationalist identity–is used as an allegory for how sacred art and politics collide. Other works of the artist combine not just Latin American religious references but African ones as well; works like Ngongtanga (2016) hybridize folkloric objects from different contexts. Russian matrioshka dolls, references to Mexican ancient sculptures, and even African masks and vodum fetishes are combined and juxtaposed to illustrate how these symbols are in perpetual, transnational circulation–one that exceeds Western imaginaries. Demiurgo (2015), meanwhile, takes as its inspiration the Rebis, the alchemical conclusion of joining spirit and matter into a being of both male and female genders. Villegas associates an artist's creative process with this alchemical union.

Taken together, these works use allegory the way Julio Cort åzar and Jorge Luis Borges might. Both writers have been very influential to the artist, who referencesthem many times. Borges defined allegory as a superficial labyrinth of far-fetched metaphors, while Julio Cortazar developed the concept of almanac literature as a new format for telling stories with prose, poetry and images. Both lead Villegas to reflect on ideas of repetition, rite, and myth as it relates to transculturalism, religious piety, and national identity.

Veronica Villegas was born in 1989 in El Paso,Texas. Villegas lives and works in Mexico City. She received her BFA and MFA from the National Autonomous University of Mexico (UNAM) in 2012 and 2016, respectively. Her artwork is focused on contemporary religious imaginaries in Latin America and their relationship to different cultural contexts. Exhibitions include Casa Galleria and Leo Trotsky Museum, Mexico City, Mexico (2016); and Mexican Honorary Consulate and Cervantes Institute, Hamburg, Germany (2015). 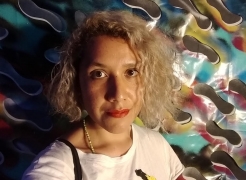 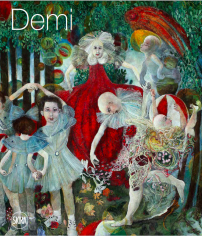